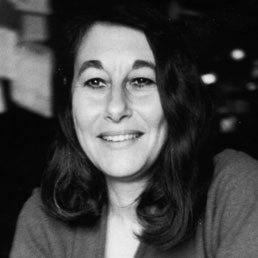 Gina Berriault was born in California to Russian-Jewish immigrants. During her long career she authored four novels and three story collections and won honors including a Guggenheim Fellowship, a Pushcart Prize, and several O. Henry prizes. Widely admired as one of the great American short story writers, she achieved commercial success late in life with the collection Women in Their Beds (Counterpoint, 1996), which received the PEN/Faulkner Award, the National Book Critics Circle Award, and the Rea Foundation Prize. “The Woman in the Rose-Colored Dress” is from that collection. Berriault died at home in 1999.

The Woman in the Rose-Colored Dress

My mother took me along to that party because my thirteenth birthday fell only one day after, and she said we could imagine it as a party for me, a birthday party that only we two knew about. Wandering away from my mother and the friends embracing her, I went out alone into the rooms where the strangers were. Whenever I glanced up I met a glance, and nobody spoke jokingly to me the way they do to a child, and when men came up to me they treated me with a kind of knowingness, as if I were already steeped in the experiences I had only imagined.

I can see myself in memory as if I were observing another girl from a corner of a room: how she looked in a pale green dress that clung to the small breasts and the rounding hips, not in gathered stuff nor pleats anymore, not in autonomous material, but in the kind that conformed to the young body that was just beginning to make itself known, or its willingness known, or its own will known. And I can see how she turned to tantalize in profile, her fair hair cut short to her shoulders, no braids, no barrettes anymore, and I can hear a fragment of her voice, a voice that was changing like a boy’s voice changes, but hers changed by anticipation, not high and uncertain like a child’s.

Want to read the rest?
Please login.
New to Narrative? sign up.
It's easy and free.