The Man Who
Would Be King

“Brother to a Prince and fellow to a beggar if he be found worthy.”

The Law, as quoted, lays down a fair conduct of life, and one not easy to follow. I have been fellow to a beggar again and again under circumstances which prevented either of us finding out whether the other was worthy.

I have still to be brother to a Prince, though I once came near to kinship with what might have been a veritable King and was promised the reversion of a Kingdom—army, law-courts, revenue and policy all complete. But, to-day, I greatly fear that my King is dead, and if I want a crown I must go and hunt it for myself.

The beginning of everything was in a railway train upon the road to Mhow from Ajmir. There had been a deficit in the Budget, which necessitated travelling, not Second-class, which is only half as dear as First-class, but by Intermediate, which is very awful indeed. There are no cushions in the Intermediate class, and the population are either Intermediate, which is Eurasian, or native, which for a long night journey is nasty; or Loafer, which is amusing though intoxicated. 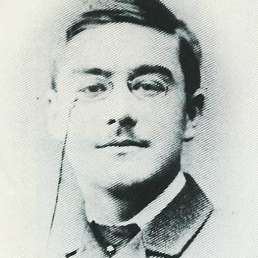 Rudyard Kipling (1865–1936) was born in Bombay but returned to England, at age six, to be cared for by a couple whose cruelty became the basis of his work. Recognized as an incomparable interpreter of the British Empire, Kipling wrote “The Man Who Would Be King” (1888) about the imperial impulses of military campaigns in Afghanistan and Iraq. Author of the poems “Mandalay” and “Gunga Din” as well as classics such as The Jungle Books and Just So Stories, Kipling was awarded the Nobel Prize for Literature in 1907.