Genesis and Other Poems

When I was small, my mother was fun
to tell things to. She was seriously pretty,
she was anxious, and when her picture was taken
she held still
to be looked at, to be
admired, and judged. But when I was three,
and I told her, lisping, that I liked to hold
the satin binding of my blanket while I sucked
my thumb, she liked to hear that—thucked
my thumb—her face lit up from within.
So I have her to thank that I like telling
things. The folder I found today
was made in 1917
of soft cardboard, lichen-embossed—
my mother was born during a world war,
like me. In the photo, she is scary pretty,
with a full mouth of baby teeth, like a piglet
piranha, and her mother had spiraled the ends of her
hair into a tumble of curls,
to correct it. They corrupted my mother,
they saw her as a being more flesh
than spirit—and those eerie
sapphire eyes—she was beautiful
like an object. I do not want to touch her,
even young as she is here,
but if I could appear to her mother right now
(then) in a guise like that of the man who
wrestled with Jacob until the breaking
of the day—even though my mother’s mother
would have a good
grip on me,
I would say to her, “Do not beat
your daughter, do not tie her up.”
And then I’d say, to my mother’s mother,
Hester, “Let me go, for the day
breaketh.” And Hester would then say,
“I will not let thee go, except
thou bless me.” So I blessed my mother’s
mother, and my mother, and they let me go. 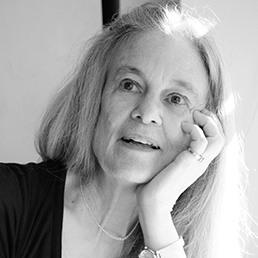 Sharon Olds is one of the foremost voices in contemporary poetry. Winner of the Pulitzer Prize in 2012 for Stag’s Leap, and the National Book Critics Circle Award in 2002 for Strike Sparks, she is known for writing intensely personal, emotionally graphic poems marked by grace, chivalry, and precision. Born in 1942 in San Francisco, Olds grew up a “hellfire Calvinist” in Berkeley, California, attended Stanford University, and earned her PhD from Columbia University. She teaches in the graduate writing program at New York University.