The neighborhood knew him because he walked its streets every day, up to ten miles, unless a thunderstorm, a hurricane, or a blizzard had driven everyone indoors. As soon as the weather cleared, he was back on the pavement, ice or no ice, snow or no snow, his leash’s collar slightly loose. The old man’s hand held the leash’s leather handle, which, over the course of a dozen sweltering New York summers and frigid winters, had been worn smooth and darkened until it was nearly black.

The slender old guy wore a floppy engineer’s cap and a gray fishing jacket, the kind with a dozen pockets. He always had a walnut-colored leather pouch slung over one shoulder and a dented silver canteen hung on a twill strap draped over the other. His shirts were flannel or cotton, depending on the season, his pants never anything but beige chinos. His boots were ankle height with thick rubber soles and rawhide laces. A thin but bristly mustache straddled his upper lip, and I noticed, by the time I was ten, that he scratched it contemplatively, not because it itched. I lived around the corner from his house, and my curiosity about him led him, in a way, to adopt me. This earned me rare privileges, denied to the rest of my friends, such as the summer day he saw me having trouble spinning my wooden top on the street’s soft tar. He tilted his head, as if to say come on, and I followed him to his garage, which was his sanctuary. There he placed my top in a vise clamped to his dusty workbench, took a file, and rounded the sharp metal point of my top so that it would spin longer, which it did.

He was Mr. Whalen. His dog, Charlie, a beagle, purebred, classic black, tan, and white coat, twenty-odd pounds, sweet tempered, which is a beagle’s natural disposition, “merry,” according to beagle experts and enthusiasts. He considered it his job to let people on the street stop him at any place and time to pet him while Mr. Whalen stood patiently by. One evening, as dusk settled and the streetlights came on, they seemed to me to fuse into a single spirit: one being split into two bodies, two species. Charlie wasn’t Mr. Whalen’s dog, and Mr. Whalen wasn’t Charlie’s owner. Afterward, I never thought of them any other way. When my friends and I stood on the street corner waiting for the local ice-cream truck to appear on its route through the neighborhood, I often watched them approach, familiar in the distance but barely visible. When they stopped, we petted Charlie, and he accepted our fondness nobly, neither eager, indifferent, nor short tempered, while Mr. Whalen told us where they’d walked in Queens that day. 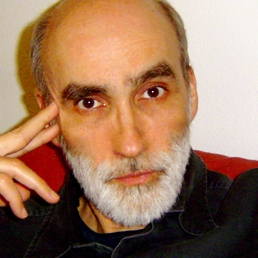 Tom Grimes is the author of numerous novels, including Redemption Song (available in our Archive), Season’s End, and City of God (both published by Narrative Library). Grimes edited The Workshop: Seven Decades of the Iowa Writers’ Workshop, and traced his long friendship with Frank Conroy, the workshop’s legendary director, in Mentor: A Memoir. He teaches in the MFA Program in Creative Writing at Texas State University.