A lesser person might have felt frightened or upset as the bus pulled away from the quays to begin its journey north, but not my mother, who held a staunch conviction that the sixteen years she had spent in Goleen being spoken down to, ignored, or treated as somehow less important than any of her six brothers had led her toward this moment of independence. Young as she was, she’d already made an uneasy peace with her condition, which, she told me later, she had discovered for the first time in Davy Talbot’s grocery shop on the main street, standing next to ten piled-up boxes of fresh oranges, when she felt my unformed foot give a little kick into her bladder, just a spasm of discomfort that might have been anything at all but that she knew would eventually be me. She didn’t consider any back-room terminations, even though there was gossip among some of the girls in the village regarding a widow-woman in Tralee who did terrible things with Epsom salts, rubber vacuum bags, and a pair of forceps. For six shillings, they said, you could be in and out of her house in a couple of hours, three or four pounds the lighter. No, she knew exactly what she was going to do when I was born. She simply had to wait until I arrived in order to put her Great Plan into place.

The bus to Dublin was busy and at the first stop a young man carrying an old brown suitcase climbed on board and glanced around at the few remaining empty seats. As he paused next to my mother for a moment, she could feel his eyes burning into her but didn’t dare turn to look at him in case he was someone familiar with her family who had already heard the news of her shame and would only need to see her face to make some cutting remark. Nothing was said, though, and after a moment he walked on. Only when the bus had traveled another five miles along the road did he make his way back to where she was sitting and point at the empty place beside her.

“Do you not have a seat down the back?” she asked, glancing toward the rear of the bus.

“The fella next to me is eating egg sandwiches and the smell of them is knockin’ me sick.” 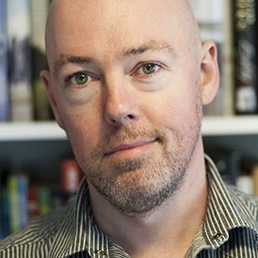 John Boyne was born in Ireland and studied at Trinity College, Dublin, and at the University of East Anglia, Norwich. He is the author of numerous works of fiction for adults, including the novel The Heart’s Invisible Furies (2017), and for younger readers, including The Boy in the Striped Pyjamas, which was made into a feature film and was a New York Times bestseller. His many honors include the 2012 Hennessy Literary Hall of Fame Award and three Irish Book Awards, and his books have been translated into fifty-one languages.