Soledad and Other Poems

though you are their sole suspect

you will not be kept
solitary for long

you will refuse
to shuffle or stumble on your shackled walk

you will know there is nothing singular
about you

Soledad is the gavel and the holding pen

Soledad is the letter sent from a locked cell

Soledad is the name we sometimes call
our most holy Virgen

Soledad insists on service to it

Soledad is the sentence
you will spend your life writing 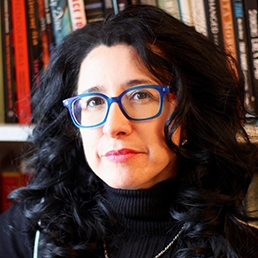 Deborah Paredez, born and raised in San Antonio, Texas, is the author of the poetry collection This Side of Skin and the critical study Selenidad: Selena, Latinos, and the Performance of Memory. She received Interdisciplinary PhD in Theatre and Drama (IPTD) from Northwestern University and is cofounder and codirector of CantoMundo, a national organization for Latinx poets. A professor of creative writing and ethnic studies at Columbia University, she lives in New York City.